So I noticed last week that my Condor Super Acciaio had notched up more than 10,000 miles since I bought it new from @CondorCycles of London a couple of years ago.  The Super Acciaio is steel frame bike nothing like those of previous eras instead sporting carbon like geometry including a tapered head tube and stiff bottom bracket.

It’s a testament to the bike that it’s lasted this long as usually it would have gone by the way of boredom or broken.  It has survived punishing winters both in London and Yorkshire, being thrashed in road and circuit racing and munched up the miles on the daily commuting. It’s been a fantastic do anything bike and fast when I’ve needed it to be.

Its a stiff bike and is pretty sharp on acceleration with a rock solid front end spurred on by the carbon blade forks. I ran it on 23mm tyres for a long time but I’m currently rating the 25mm tyres which give a bit more comfort and confidence in the corners.

The head tube is a sculpted tapered unit, a rarity in steel, and houses a tapered 1.5in to 1.125in carbon fork..  This does however seem to attract the dirt so I’ve made myself proficient in servicing it myself.  The bottom bracket is an oversized modern pressfit design (BB30). The bearings, which press directly into the frame, are cheap to replace but they also seem to need refreshing more often than those of most bottom brackets.

The Shimano Ultegra di2 has also held up reasonably well. A failed front shifter in the early days was replaced under warranty and more a recently a worn out rear derailleur. I was a little bereaved that Madison wouldn’t replace the derailleur on the grounds it had a scratch which allowed them attribute the wear to damage – hmmm. More alarmingly access to the older Ultegra di2 groupset (6770) is now winding up as parts are at the time of writing are difficult to find now that it’s been replaced by 11 speed (6870).

The Super Acciaio is now furnished with a new set of winter wheels as the cold weather approaches.  I’m very optimistic of the Hunt Wheels which have replaced the existing; more about these later. It will also be strapped with mud guards for those wet and filthy days.  I’ve no doubt it will make it through another grimy winter into 2016 and being easily maintainable I’ve really got no excuses.

Here are some of the details of my Super Acciaio which continue to make think its a keeper;

A long windy ride from London to Shakespeare’s birth place to see the family for Christmas.  The route passed through the Chilterns where I was lucky enough to see two Red Kites circling above lunch.   Brilliantly sunny day riding through the English countryside and I also happened upon a small village called Christmas Common!

Brutal headwind all the way and feet numb for the last 4 hours of the ride.  Rethink needed on shoes and socks for the colder days! 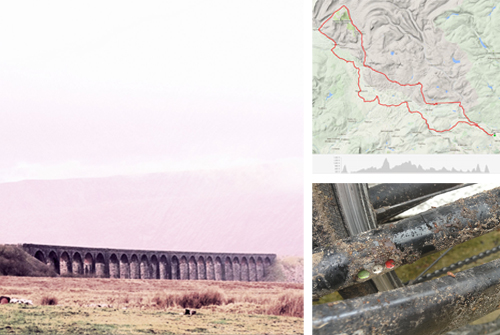 Training in Yorkshire is always challenging but pleasantly rewarding.  In the face of tough climbing the weather can turn at a moments notice a challenging ride into a seemingly impossible one.  This Yorkshire Dales Ribblehead Route is a good challenge and rewarding with epic scenery my favourite being the twisty down hills into Settle.

Wet and muddy with a puncture thrown in for good ‘getting mucky’ measure.

A super misty and mizzly ride this Saturday; very limited visibility in the higher sections especially Leith Hill and surrounding area. 103 miles covered in total but and harder for the wet conditions.

The Continental Grand Prix 4 season finally gave way to a puncture on the rear from a big piece of flint.  First puncture in 1500 miles.  Fantastic performing tyre all round.

Elite bottle cage snapped which was disappointing sheared through at the base.

A gem of a winters day. Heavy fog lifting to blue skies and not a spec of rain. A lot of flooding about from yesterday’s persistent downpour. A very gritty bike on return. 80miles covered and rewarded with a coffee and a thick slice of carrot cake.