So I noticed last week that my Condor Super Acciaio had notched up more than 10,000 miles since I bought it new from @CondorCycles of London a couple of years ago.  The Super Acciaio is steel frame bike nothing like those of previous eras instead sporting carbon like geometry including a tapered head tube and stiff bottom bracket.

It’s a testament to the bike that it’s lasted this long as usually it would have gone by the way of boredom or broken.  It has survived punishing winters both in London and Yorkshire, being thrashed in road and circuit racing and munched up the miles on the daily commuting. It’s been a fantastic do anything bike and fast when I’ve needed it to be.

Its a stiff bike and is pretty sharp on acceleration with a rock solid front end spurred on by the carbon blade forks. I ran it on 23mm tyres for a long time but I’m currently rating the 25mm tyres which give a bit more comfort and confidence in the corners.

The head tube is a sculpted tapered unit, a rarity in steel, and houses a tapered 1.5in to 1.125in carbon fork..  This does however seem to attract the dirt so I’ve made myself proficient in servicing it myself.  The bottom bracket is an oversized modern pressfit design (BB30). The bearings, which press directly into the frame, are cheap to replace but they also seem to need refreshing more often than those of most bottom brackets.

The Shimano Ultegra di2 has also held up reasonably well. A failed front shifter in the early days was replaced under warranty and more a recently a worn out rear derailleur. I was a little bereaved that Madison wouldn’t replace the derailleur on the grounds it had a scratch which allowed them attribute the wear to damage – hmmm. More alarmingly access to the older Ultegra di2 groupset (6770) is now winding up as parts are at the time of writing are difficult to find now that it’s been replaced by 11 speed (6870).

The Super Acciaio is now furnished with a new set of winter wheels as the cold weather approaches.  I’m very optimistic of the Hunt Wheels which have replaced the existing; more about these later. It will also be strapped with mud guards for those wet and filthy days.  I’ve no doubt it will make it through another grimy winter into 2016 and being easily maintainable I’ve really got no excuses.

Here are some of the details of my Super Acciaio which continue to make think its a keeper;

The opportunity has finally arrived to train with a power meter; a Stages Cycling Ultegra power meter which takes the form of the left hand crank arm replacing the original.  There are lots of options in the market place for training with power both more and less expensive than the Stages offering. Some are based in the rear wheel hub and others in the crank itself.  I am sure it won’t be too long before a company like Shimano actually builds it in as an integrated option.

The installation of the Stages power meter is straight forward and simply a case of removing the existing left crank arm and replacing it with the Stages power meter crank arm.  Note I have the Stages Ultegra 6800 as the colour matched my Ultegra 6770 groupset; there are no compatibility issues  The power meter includes a battery which requires a slip of plastic removing in order for it to make contact.  Note that there does seem to be an issue with clearance for some bikes so Stages offers a diagram which shows a 10mm hex wrench inserted between the crank arm and chain-stay as a check for clearance.

There has also been issues with the product and water penetration so it is clearly pointed out that the battery door must be correctly inserted and the o-ring type seal in the correct position.

After installing the crank I followed the set up instruction for pairing with a Garmin Edge 500 and ran through the calibration.  The Stages unit communicates with Garmin through Ant+  but also has Bluetooth to communicate with fitness apps on your phone such as Strava.  The first couple of rides out on the road the signal would continuously drop and the power reading would hit ‘0’ and then three dashes  (‘- – -‘)  would appear before a few seconds of nothing and then the reading would come back but only to drop off again.

Stages have a good list of potential fixes in their support section so after updating the firmware for the power meter via an app on my iPhone and updating the software on the Garmin I tried again.  Sadly no luck.

Finally I switched my Garmin ‘out front’ bracket which holds the Edge 500 in front of the handlebars to the standard bracket which holds it in place on top of the stem with rubber bands.  Hey presto no signal drop off between Garmin and the Stages and all is well with the power readings.  I would guess that due to the position of the Garmin unit with the out front bracket that the handlebar itself is attributing to interrupting the signal.

Now onto the fun bit which is to make good use of the data while training. Back soon…. 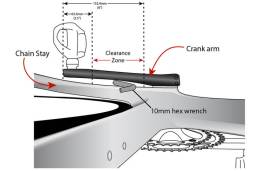 I have been training out in Mallorca this week trying to avoid the snow and ice back home in the UK. Its early in the Mallorca cycling season with shops and restaurants just on the cusp of opening.
Some riders of the Cannondale-Garmin Pro Cycling Team are here and we’ve been lucky enough to spin our wheels in their draft.

The weather is unsettled with strong winds and rains hampering training.  It’s difficult to anticipate the mountains with temperatures plummeting as height is gained and snowfall within the last few days.  Care has to be taken cornering downhill on the wet Mallorca tarmac. Falling rocks and jumping goats add to the obstacles on the road.

It’s my wedding anniversary this weekend so I won’t be training on the bike.

Since I needed an inspired wedding anniversary gift for my wife I headed down to Alex Monroe jewellery shop near London Bridge.

Mrs Bugg loves Alex Monroe jewellery specifically the beautiful bumble bee pieces. She says it reminds her of her married name.  The intricate nature of the jewellery designs fascinates me knowing the skill required to create each piece.  Whilst I was there I noticed the selection of bicycle necklaces which resonates with my passion for cycling.

Amazingly Alex has kindly offered to donate one of these beautiful necklaces for raffling as part of my fundraising effort.  The full range can be found at alexmonroe.com and was created through Alex’s love of cycling.  He has an old school yellow Bianchi with horn handlebars which he rides into work. Very cool.

Details on the raffle will be posted soon, watch this space.